Below is one of the original Harrison Assessments case studies from 30 years ago! For those too young to know, the CES (now called Centrelink) is the Australian government employment service.

It was 1990 and BP and the Australian Commonwealth Employment Service (CES, now Centrelink) had a problem. They were jointly running a scheme to provide long-term unemployed teenagers with jobs as forecourt attendants at their service stations (or gas stations). The government were providing customer service training followed by 3 months subsidised salary, whilst BP were providing full time jobs for successful trainees. However, only 1 in 5 trainees were still in employment at the end of the three months.

With training and subsidies approaching $20,000 per head the future of the entire program was at risk. Results from schemes with other employers were equally poor so it was unlikely that the high attrition rate could be attributed to BP or the job itself. The problem seemed to be that far too many candidates were being placed into the program who were unsuitable for customer service roles.

To ensure that the scheme was continued it was imperative that the retention rate was increased. BP were unlikely to retain interest while the quality of the potential employees remained low and additionally, it was of little benefit to the long-term unemployed teenagers to be trained for a job in which they had little interest. The objectives were to increase employee retention, improve the overall quality of the candidates and to provide the teenagers with jobs they would be happy and successful at.

What makes a good forecourt attendant?

To start with, BP/CES needed to establish if there were any personal characteristics that would indicate that someone would be a first-class customer service representative. Only 1 in 5 of the young adults who had started the course were successful. Was there a pattern to aspects of their personality that were different from the 4 in 5 who didn't complete the program?

If there were differences, then teenagers could be effectively cast into customer service roles, just as a director casts actors in a play. Many people could play Romeo, but only actors with certain characteristics are suited to playing the great lover successfully.

At this point BP/CES approached Harrison Assessments (HA) who had developed a profiling system which measured a large number of behavioural tendencies, interests and preferences. The Harrison system was based on 2 main theories.

Enjoyment-Performance Theory states that if an individual enjoys performing a certain task or behaving in a particular way, they will act in that way more frequently and these particular traits will, as a result, become better developed. The converse applies to those behaviours and tasks we don't enjoy and that we tend to procrastinate or avoid doing them.

Paradox Theory is more complicated, but essentially, traits that appear as contradictory, or mutually exclusive, (e.g. Diplomacy and Frankness), are in fact complementary. Harrison doesn't simply measure whether an individual is more diplomatic or more frank, but measures both traits independently. An individual who is both very frank and very diplomatic will be a far better communicator than someone who is neither.

Harrison Assessments examined 130 behavioural traits from a number of previously successful and unsuccessful forecourt attendants. The results did indeed show that there were a number of characteristics that would indicate a winner at customer service in the forecourt environment.

Just as a casting director will be looking for sensitive eyes and a lithe grace for his Romeo, our star customer service staff have the following traits;

In addition, a number of traits were found to be counter productive to customer service performance.

Just as even a suitable actor couldn't play Romeo without preparation, rehearsal and direction - customer service staff also require proper training and experience before they can be successful.

So, armed with the new pre-screening system a panel of BP and CES staff interviewed teenage applicants for the forecourt attendant training scheme. None of the applicants were guaranteed a job if they got a place on the course but they clearly had an advantage if they did well.

Many of the panel however, were experienced recruiters and they were sceptical of the pre-screening system. Despite the results of the screening before the interview, they still accepted several teenagers that the system indicated did not have the right level and mix of characteristics to succeed in this job. Unfortunately, the pre-screening was proved to be correct, and the teenagers deemed to be unsuitable for customer service began to seriously disrupt the course.

This led the panel to rethink the use of the system on subsequent courses and only those candidates who were both suitable for customer service and did well in the interview were accepted for training. It is important to remember that the screening was an add-on to the recruitment process, not a replacement for the face to face interaction.

On successfully completing the course the trainees were invited to apply for a role as a BP forecourt attendant. There was no compulsion for them to do so. During the first three months BP conducted mystery shopping research at their service stations to gauge the level of customer experience the graduates were providing. The results were very pleasing. 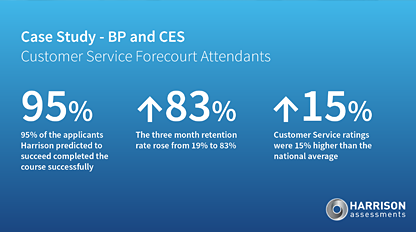 Overall, 601 long-term unemployed teenagers applied for the BP/CES scheme. 94 made it through the screening and interview process to begin training.

95% of the applicants predicted to succeed completed the course successfully. 4 of the 6 applicants rated as unsuitable failed to complete the course.

By the end of the three month subsidised employment period the number of previously long-term unemployed teenagers who remained in the job had risen from 19% to 83%! These same teenagers were achieving customer service ratings (from mystery shopper surveys) 15% higher than the national average. In addition, sales in stores with these teenagers reported sales increases of up to 25% on some product lines.

The CES estimated the savings in training costs realised by selecting only people who are suitable for customer service to be over $1,000,000 across the 5 courses.

Customer service is the face any organisation presents to the world and how an organisation interacts with its customers can define the organisation itself. Dealing with people who are genuinely warm and helpful is a pleasurable and positive experience for the customer. All of us can play a number of roles in life and simply by screening for candidates who were suitable for this particular role, BP made an enormous positive difference to their profits, their customer experience and a potentially life-changing opportunity to large group of previously unemployed teenagers.

Curious to know more?
Get in touch for a free demo.